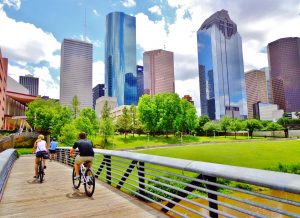 Diverse populations offer additional skills, ideas, and perspectives, both to communities and in the workplace. Additionally, research shows that open, inclusive, and diverse societies directly contribute to economic growth. Houston, Texas’s biggest city and the 4th largest in the U.S., is reaping the benefits of diversity by embracing its own increasingly multi-layered landscape – and businesses are taking notice.

Diverse – With a Touch of Cool

Based on factors like religion, culture, and economics, Houston has recently been rated the most diverse city in the country. Its vast green spaces, international food scene, and affordable housing attract people from all over the globe. With an Anglo population now under 40%, nearly 1 in 4 Houstonians foreign-born, and 46% of its residents speaking a language other than English at home, Houston is now more racially and ethnically dynamic than New York.

Along with the cultural and economic incentives, the city offers a down-to-earth vibe embraced by professionals, blue-collar workers, and techies alike. Rated by Forbes as one of the top five coolest cities to live in, Houston has transformed its previously stagnant cityscape into a bustling downtown packed with art galleries, world-class museums, and an eclectic theater district. It’s no wonder over 2.3 million people now call Houston home.

Texas is currently positioned to outpace California due to its proximity to the world’s top aerospace, energy, and healthcare companies, among others. And, largely due to its willingness to innovate with technology in those industries, Tesla, Oracle, and many others have made Texas their choice for company operations and satellite offices. With no income taxes, abundant land, and pro-industry policies, it’s simply cheaper to do business in the Lone Star state.

Tech companies have not hesitated to jump on the state’s business-friendly bandwagon, particularly as it leads to Houston. Citing an attractive market to recruit and retain diverse talent, Hewlett Packard Enterprise is relocating from California to the Bayou City, constructing a state-of-the-art campus projected to open its doors in early 2022. Additionally, venture capitalists are pouring millions of dollars into tech innovation in Houston – $2.6 billion over the last five years – making Houston a prime location for the next wave of innovation.

In this industrial boom, businesses are not just testing the waters in Houston; they’re putting down roots. As the largest U.S. city without zoning laws separating commercial and residential districts, Houston has grown multiple business districts rather than one single downtown area. As a result, Houston commercial real estate is thriving. As of mid-year 2021, developers delivered 8.7 million square feet of new projects, putting the city’s industrial development well above average.

Economies generally succeed when they embrace and capitalize on new ideas. Diverse cities typically offer a wider array of cultural amenities and a finer division of labor, thus providing more options to their citizens and industries.

Of all the booming Texas markets housing big business, Houston stands out for its diversity of people and thought. A major port, thriving energy sector, and advanced healthcare system significantly impact local, state, and national economies and set Houston apart from the rest of Texas. Additionally, as the country’s most diverse city, Houston offers endless opportunities for businesses to meld their new ideas with the city’s creative spirit.